I believe every birding photographer, after getting all the regular ID type shots, will work his way towards photographing birds doing some sort of activity.  This would imply the typical foraging or eating photos, building nests, birds in flight (also see my previous article on this topic), even birds doing the natural thing of ensuring their species will continue to exist, birds on the hunt and so on.  When catching those birds in flight, it invariably leads to birds landing and perching again, which is fairly easy to do; the photographer is already tracking the bird through his viewfinder.  Catching the landing of waterbirds on a dam or pond, or birds braking to land on a perch is therefor quite easily accomplished with some minor adjustments in tracking techniques.  But to catch them launching and taking off is a different story altogether, with some species making it easy, and others are just plain difficult to catch on camera.

The larger bird species are easier, some take a run to build up speed before getting airborne such as Flamingos, some squat slightly and then jump up whilst spreading their wings typical of the larger Heron species.  Most waterbirds like the Duck species will use their webbed feet as paddles to launch themselves whilst flapping wings at the same time, they tend not to worry about the direction of the wind as some other birds do.  The smaller birds when perched will tend to face into the wind when launching for flight, typical for Swallows, whilst other appear to just let go of the perch and take to flight.

This is where knowledge of the behavioural characteristics of birds will come in handy.  Study their “technique” and plan for that.  Then concentrate on tell-tale signs that they might take off, such as ruffling of feathers, stretching wings, bobbing their head up and down, defecating, turning around on a perch to face into the breeze.  When there is more than one bird, typical pairs or small flocks, watch the remainder when one flies off.  Focus on a specific bird showing the tell-tale signs, leave space in the frame  for movement, and keep the shutter finger ready for action.

You will need really fast reflexes to catch certain species of birds. The smaller Bishops, Weavers, Finches, Swallows, Kingfishers etc, really are quick off the mark; blink and you’ll miss the moment.

I therefore suggest you start with the larger bird species first, as mentioned Flamingos make easy targets – they will literally run on the water flapping wings for quite a few meters before taking flight and is really quite fascinating to watch. Pelicans and other large waterbirds do the same.  Some large land-based birds such as Vultures also usually do a short run of a few steps whilst flapping their wings, and then lift off.

Discussing technicalities of some of the photos presented:

Catching streaming water from their claws, or the splashing when waterbirds take to flight adds an interesting extra perspective to your photos.  Ducks, Herons and Gulls can make interesting shots, they are relatively slow on take-off, yet you need to be ready all the time.

Remember to add space in the frame for their wings, large birds with wings spread out to the full become a very large subject.  I took the photos of the Black-headed Heron taking off at Finfoot Lake Reserve. The portrait orientation was due to me taking static shots at 800mm zoom setting.  The Heron suddenly turned a little away from me facing more towards the dam, stretched out its neck and  I realised its planning to take to flight.  Even though I quickly zoomed out to 466mm when it took off, I still clipped the wings, but when the wings where in a more forward-stroke position it easily fitted in the frame.

Similarly, the Black-winged Kite with the clipped wings also caught me by surprise as it took off in my direction and not sideways as I expected from its perched position, where it easily fitted in the frame.  The normal perched shots were taken at 800mm, and I zoomed back to 610mm in anticipation of a take-off moment, ( it ruffled feathers) yet coming towards me it is too large an overall subject with wings extended.

The Black-chested Snake Eagle taking off from the treetop is actually leaving its nest, where the female and their chick remained behind. They can just be seen in the lower left corner of the frame.  Using a long lens (Sigma 300-800 @800mm) means you can keep well clear of the nesting area and still capture those moments of them arriving with a snake, feeding the chick etc.  It is vitally important to never approach too close to a nest of any bird, and never disturb them at the nesting area.  If you don’t have a long lens rather crop into the image afterwards in your developing software.

The White-bellied Sunbird on launch was captured at Aloe Farm near Hartbeespoort dam whilst reviewing the excellent Canon EOS 1D X MkII for Canon South Africa  just after it was officially announced, fitted with the Sigma 300-800.  Anticipation, very quick reflexes and  some luck made that image possible – Sunbirds are very active, always on the move with lots of fluttering about.  No tell-tale signs here, just anticipation.

A faster shutter speed to freeze of the movement especially on smaller birds, more loose framing to allow for movement and spread-out wings (larger birds) and also a little more depth of field to allow for slight focus offset on movement (if the AF cannot catch up fast enough) will all help towards creating nice photos of birds on lift-off.

Keeping some the perch in the frame will assist to differentiate your take-off image from a regular in-flight image.

Practice makes perfect, and along with knowledge of your quarry and a healthy dose of luck you can also say proudly “Houston, we have a lift-off”.

Feel free to contact me for any advice or assistance you may require.  Happy shooting! 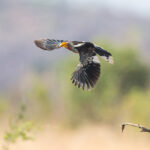 All content © Tudortech 2020
Back to Top
We use cookies on our website to give you the most relevant experience by remembering your preferences and repeat visits. By clicking “Accept All”, you consent to the use of ALL the cookies. However, you may visit "Cookie Settings" to provide a controlled consent.
Cookie SettingsAccept All
Manage consent

This website uses cookies to improve your experience while you navigate through the website. Out of these, the cookies that are categorized as necessary are stored on your browser as they are essential for the working of basic functionalities of the website. We also use third-party cookies that help us analyze and understand how you use this website. These cookies will be stored in your browser only with your consent. You also have the option to opt-out of these cookies. But opting out of some of these cookies may affect your browsing experience.
Necessary Always Enabled
Necessary cookies are absolutely essential for the website to function properly. These cookies ensure basic functionalities and security features of the website, anonymously.
Functional
Functional cookies help to perform certain functionalities like sharing the content of the website on social media platforms, collect feedbacks, and other third-party features.
Performance
Performance cookies are used to understand and analyze the key performance indexes of the website which helps in delivering a better user experience for the visitors.
Analytics
Analytical cookies are used to understand how visitors interact with the website. These cookies help provide information on metrics the number of visitors, bounce rate, traffic source, etc.
Advertisement
Advertisement cookies are used to provide visitors with relevant ads and marketing campaigns. These cookies track visitors across websites and collect information to provide customized ads.
Others
Other uncategorized cookies are those that are being analyzed and have not been classified into a category as yet.
SAVE & ACCEPT